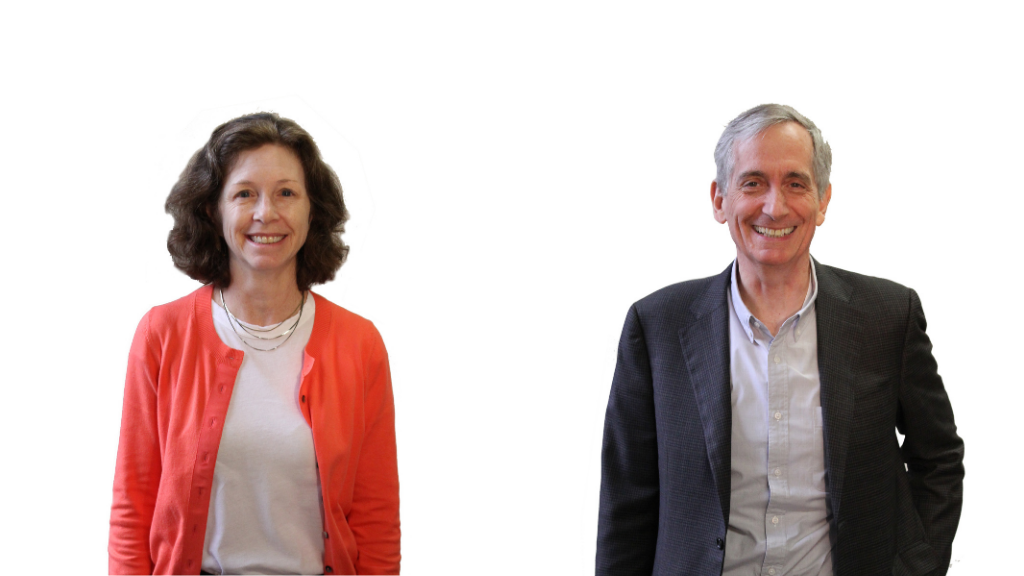 Before The Campaign for SYA had been formally conceptualized, France alumni and longtime supporters Alexandra Alger FR’79 CN’12P and Jamie Broderick FR ’71 were already considering the possibilities of this first-ever comprehensive effort to secure SYA’s future. It was no surprise to the greater SYA community that this devoted twosome would be tapped to lead the charge. Their genuine love for SYA and their belief in SYA’s role in creating a better world make Alex and Jamie the perfect overseers of this historic undertaking.

Here they reveal their reasons for supporting The Campaign for SYA, and share some lesser-known facts about themselves.

What is your favorite item on your work desk right now?
My weekly planner. Yup, I still have one.

What are you currently reading?
White Fragility: Why It’s So Hard for White People to Talk About Racism by Robin DiAngelo. I thought I was enlightened and there was little I could learn about race. Wrong!

Name something that no one would ever guess about you.
I am capable of eating an entire fruit pie in one sitting, and a pint of Haagen Dazs ice cream (though not together).

What was one thing that surprised you about being abroad?
Having never been overseas before, I was in a constant state of being surprised and pleasantly so.

How has SYA changed you?
SYA made Francophiles of my whole family. A few years after my year in France, my parents bought a house in the Dordogne region, and they and my two sisters and I became part of a small community there for about 15 years.

What is your favorite place to visit?
La France!

Who is the person or people you admire most?
The clerks at my local grocery store, who came to work during the most deadly days of the pandemic last spring, and didn’t get the accolades that the doctors and nurses did (they were heroic, too!).

Your son (Davison Chung CN’12) attended SYA China. How would you say your experiences compared?
I think the SYA China experience today–the difference in culture, the strangeness and yet the wonder of everything, going it alone, without easy access to social media, because of government censorship—is akin to what France was like for me back in the pre-internet ’70s.  He came back more confident in himself and comfortable in the world as a global citizen.

What is your top reason for supporting the campaign?
I remember how special my year was, and I want to do everything I can to ensure that SYA can serve this generation of students and beyond.

What is your greatest hope for the future of SYA?
I’d want every prospective SYAer to be able to go, regardless of their ability to pay.

“I remember how special my year was, and I want to do everything I can to ensure that SYA can serve this generation of students and beyond.”

What are you currently reading?
La Peste, (The Plague) by Albert Camus.  It’s eerie to realize how much we already knew about the way people behave in a pandemic … in 1947.

What is your top reason for supporting the campaign?
SYA provided the most transformational year of my life, and continues to do so for following generations.  It pointed me at an appreciation for other cultures, challenged my starting assumptions, tested the limits of my comfort zone, showed me what I was capable of, introduced me to the music of language, forced me to experience and process the world’s wonders on my own.  That’s worth kicking in a few dollars.

What is your favorite place to visit?
Cairo

Name one thing that you never would have done had it not been for SYA.
If not for SYA, I would not likely have studied German, majored in Linguistics, studied Old French, lived in Germany, studied Arabic, lived in Egypt, entered a PhD program in Near Eastern Studies, taught Arabic at Tufts… and become a banker and moved to London for 25 years.  Otherwise, everything would have been the same.

What is your favorite item on your work desk right now?
My laptop. It is also my least favorite.

Who is the person you admire most and why?
Barack Obama.  If you need to know why, watch the video of his address to the 2020 Democratic National Convention.

What do you consider to be your greatest personal or professional accomplishment?
Writing a basic Arabic word processor from scratch in the mid-eighties, including building the font, and right-to-left format. Then added a feature that allowed you to conduct original (if simple) conversations in Arabic with the computer.

What surprised you most about your SYA experience?
I was mesmerized at how every waking moment was stimulating and slightly unfamiliar, even something as trivial as walking down the street.

Please share the best advice you have ever been given, and by whom.
My boarding school roommate told me “You should apply to Schoolboys Abroad.”

What is your favorite way to relax?
Reading Yiddish literature.

What is your favorite SYA memory?
Contacting my mother to obtain permission from SYA France Director Harris Thomas to travel around France by hitchhiking.  Because there was a PTT (Postes, Télégraphes et Téléphones) strike, there was no international telephone service, so I had to get in touch with my friend F5JU (“Foxtrot Five Japan Uniform) and his son F5JU-bis for some help.  F5JU put out a general call on his ham radio (“CQ Eastern United States, CQ Eastern United States…”), and found a ham radio operator in Framingham, Mass., who then called my mother in Boston and relayed the request.  She was a little surprised to get the call, but consented, and the permission was relayed back to me via F5JU.  Mr. Thomas thought me a trustworthy SYAer and accepted my report of the communication as parental consent.  It wouldn’t work today, but this was 1971.

What is your greatest hope for the future of SYA?
In a shrinking, globalizing, homogenizing, fully connected world, I would hope that SYA can continue to somehow still cast adolescents loose from their tethers to experience a challenging, uncomfortable, unfamiliar, soul-expanding adventure.

You can learn more about The Campaign for SYA leadership team here.